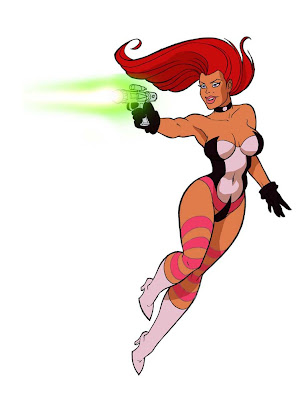 With my fellow screenwriter Rasmus Borowski I once was inventing this story about a comic book amazon girl who suddenly enters the real world. With her kind of destructive behaviour and simple 'good vs. evil' way of thinking she brings some trouble to the life of the artist who created her. In the somewhat crazy and silly action filled storyline she has to fight against censorship, police special forces and the ban of her own comic series. The idea was to make a movie like "Roger Rabbit" but with a boys fantasy of a sexy comic book heroine. Of course it was too expensive and too badly written, so "Europacorp" wasn't interested. Nevertheless it was funny to write and to design the main character BETTY POWERS.
Posted by Arne Jysch at 21:32